The wrist is a complex joint that connects the forearm to the hand enabling movement. It consists of 8 small bones called carpals that articulate with two long bones of the forearm (radius and ulna). The scaphoid (at the base of the thumb) and lunate (at the centre of the wrist) are carpal bones aligned next to each other and are attached by a ligament called the scapholunate ligament.

Scapholunate ligament injuries are common and usually occur due to a sudden excessive stress on the wrist caused by a fall or sports injury. An injury to the scapholunate ligament may result in a partial or complete tear of the ligament with separation of the bones. Symptoms depend on the severity of the injury and usually include wrist pain, swelling and inability to perform certain activities. Arthritis may develop in chronic cases. Other ligament injuries as well as fracture or dislocation of the bones may also be present.

To diagnose a scapholunate ligament injury your doctor will review your symptoms and history and perform a physical examination of the wrist. X-rays are ordered to identify bone separation, fractures or arthritis. Mild cases may not be visible on regular X-rays so detailed imaging such as an MRI scan may be necessary. Arthroscopy, a minimally invasive procedure may be performed if the diagnosis remains unclear. The procedure involves making a small incision in your wrist through which a tube with a camera is inserted to examine the joint.

Mild scapholunate ligament injuries without changes on the X-ray are usually treated conservatively. Medication is prescribed to reduce pain and inflammation and the wrist is placed in a cast or brace for a period of 2-6 weeks. This is followed by gradual stretching and strengthening of the wrist. If conservative treatment options fail to relieve pain or a significant gap or angulation exists between the scaphoid and lunate bones, surgery may be necessary. Surgery is usually performed arthroscopically with miniature instruments and may involve repairing the torn ligament, removing dead or unwanted tissue, and placing pins to stabilise the bones. Following surgery, the wrist is supported by a splint or cast for 1-2 weeks. You will be instructed on special exercises to regain strength and mobility of your wrist. Complete healing and return to strenuous activities such as sports may take about 6 months. 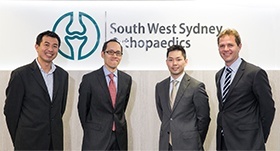